The days are definitely getting colder and darker. That’s the best time to curl up with a good book–especially a mystery. This month’s featured indie author is Rebecca Howie, writer and blogger of For The Love of Fiction. Definitely check out her website. 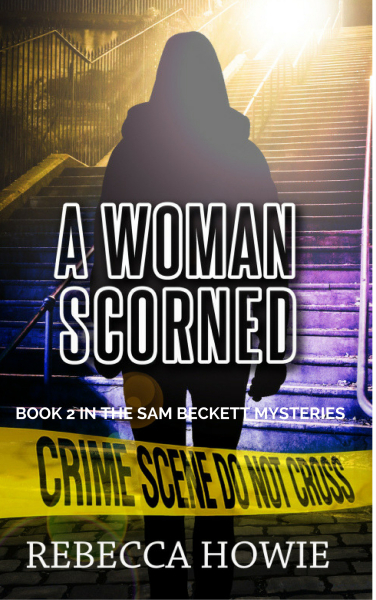 It’s called A Woman Scorned, and it’s the second instalment in the Sam Beckett Mysteries.

I actually have loads of titles which don’t have stories yet, but two of my favourites are ‘Retribution’ and ‘Trial by Fire’. I have no idea if I’ll ever use them, but I liked the sound of them when I thought them up, so I might try and write a story for each.

Words are kind of our thing. What’s your favorite word?

I like ‘mellifluous’ and ‘ethereal’ and ‘denouement’ because they sound nice, but my favourite word is ‘defenestration’ because I never expected its meaning to be what it is.

I used to write whenever I had the time, but since I found it difficult to get focussed on A Woman Scorned, I made myself write for a few hours every morning, and that’s become my routine.

Character names have to feel right for me, and I can waste a lot of time trying to pick one. They need to suit the character, and they also have to fit in with the story’s setting, so it takes me a while to name new characters.

Luckily I didn’t have to spend too much time naming the main characters in The Game Begins and A Woman Scorned, because I’d already written them in other projects, or their names just came to me while I was writing.

The first thing I do as soon as I finish a project is to switch my laptop off, and I’ll either watch a film, or go out a walk. I like just being able to take a break and getting to clear my head, although when I finished writing A Woman Scorned, my break took about three months, and I didn’t go near my computer once during that time.

I never planned to publish anything I’d written, so seeing my books being for sale on Amazon and Waterstones was unexpected. It’s still strange, and I haven’t quite wrapped my head around the fact that I’ve written two books and that other people have read them and enjoyed them, although it’s almost been three years since I started writing The Game Begins.

I’d quite like to know what James Oswald thinks of my writing, or Ian Rankin. I love their writing, so it would be amazing if they even knew of my existence, although I’d be terrified if I thought they were reading my books.

Too many to count, and I don’t think I want to ever attempt it. You can’t move in my room for notepads and stationary.

I love watching life happening around me, whether it’s people going about their day, or just nature running its course. Overheard conversations on public transport are a great source of inspiration for me, as are local newspapers, and living in the countryside means I get to see lots of birds of prey and wild animals in their element, which is always calming to see.

The internet. I spent a lot of time researching things for my writing, and I can fritter away hours Googling things which only have the faintest relevance to my writing projects.

I made it a resolution in January to try reading more indie novels, and I’ve read a few including K.J. Chapman’s Evo Nation trilogy, Suzanne Rogerson’s Visions of Zarua, and Ian Gregoire’s Exercise of Vital Powers.

The great thing I love about trying new authors is that I’m reading books in other genres, so I plan to keep finding more indie authors with even more stories to pass my time with.

It was great getting to know you better as a person and a writer, Rebecca! Thanks for participating in MAIAM.